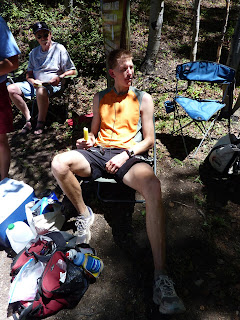 This is what hurtin' looks like at Slumgullion at mile 40.

It had been a tumultuous previous 9 months in terms of running for me. In September 2009 I had knee surgery on my left knee (menisectomy) and in February 2010, during the Orcas Island 50k, I ended up with some severe-feeling IT band pain that lasted throughout the spring. Needless to say going in the SJS50, my confidence was low. I hadn't run a 50 miler since my knee surgery and my IT band hadn't been tested at the distance since I began rehabbing it after the Orcas Island run. I'm extremely pleased to report I had no knee pain or IT band pain during the SJS50 this year. But my stomach did cause me distress...

Weather conditions for this year's race were ideal for a fast run. Clear sky, low water in the stream in Alpine Gulch, very little snow on the divide and a tailwind along the divide helped serve up some speedy times for the front-runners. Unfortunately I'd been running only 25 to 30 miles per week so I couldn't take better advantage of the stellar conditions. And then there was the stomach issue too.

Running from the start to the first aid station, Williams, at mile ~16, I consciously kept myself in check and didn't bomb down the beautiful singletrack into Williams like I normally do. During the descent down towards Williams I passed by a familiar-looking face and asked him if he was Brandon. Yes he was. Nice to meet you, briefly, Brandon.

My primary goal this year was to feel good going from the Slumgullion aid station at mile 40 through Vickers Ranch to the finish. In my previous four years in a row on this course, I'd always felt like crap on this section. So when I arrived into Williams at 8:15am, my legs were feeling good and I felt like I had done a good job of keeping myself in check. I had run the final few miles into Williams with Mike Priddy and enjoyed his company.

Also, since I wasn't well-trained for this race this year, I decided to experiment with food a bit and opted to eat a peanut butter and jam sandwich at Williams and Carson. As tasty as they were (and I had eaten some on recent training runs), I think they resulted in my stomach trouble all day. I ate one as I left Williams en route to Carson and think I ran/hiked well up to Carson by 9:45am. At Carson I was still with a few of the other Los Alamos runners in the race—David Coblentz, Brian Crone and Blake Wood. Leaving Carson, I munched on another peanut butter and jam sandwich as I hiked out of Carson with my two hand bottles of water, a full gel flask, two gel packets and some electrolyte tablets. No jacket necessary this year, thankfully. Blake ran by me running strong up the hills and I'd only see him again once more leaving the Divide aid station. David and I were together until the descent off of the course highpoint, Coney Peak (13,330'), when David just plain took off. Somewhere around here I realized I could not stomach the idea of any gels and each time I drank some water I felt like I had to burp repeatedly before I could really run. I soon realized there was no way I'd be eating any gels so I dumped out some gel from my gel flask to save weight. I ran when I could but mostly power hiked all along the divide eventually reaching the Divide aid station at mile ~31 around 12:15pm. The only thing that sounded even remotely good to eat was watermelon so I sat down at the aid station and ate three pieces of watermelon and refilled my two hand bottles with water. Also, I dumped the remaining gel from my flask into the garbage bag.

I was tempted to hang out longer at the aid station but it that would just prolong the inevitable so I got up and started walking out of the aid station. From the divide aid station it's a bit of climbing before the real descent into Slumgullion begins so I just walked it. About ½ mile out of the aid station I found a stump in the trees and sat down for five minutes. I was feeling pretty awful and just wanted to rest for a bit. I knew I was getting a bit dehydrated, too, so I drank about half a bottle of water while I sat before getting up and moving again. As I hiked over the last bit of uphill before the descent, a runner named Rhonda (she finished third female overall in the end) ran past me. Rhonda running by me helped inspire me to run again so I thank her for that. I followed her down the descent running as much as I could and eventually passed by her as we ran into Rambouillet Park before it goes uphill for a short bit. At the top of the climb Rhonda passed by me again saying that she'd see me on the descent again. I stopped to empty out my shoes which probably wasn't really necessary but it was a fine excuse to sit down again.

The final descent down the often steep and technical dirt road to Slumgullion normally beats me into submission but today my legs were feeling good despite my stomach trouble. So I ran rather well downhill into Slumgullion passing Rhonda once again before reaching the Slumgullion aid station right about 2:00pm. At this point I knew I would not be able to run a sub-11 race since it takes me a solid 2+ hours to run the final 10 miles of the race.

Allison was waiting for me at Slumgullion with a chair and all the things I had written down that I'd want. It turned out all I really wanted was the chair. No way could I eat another peanut butter and jam sandwich, I couldn't stomach the idea of gels, I was feeling pretty beat. Then I saw Tom Stockton who had dropped out earlier and that, for a moment, tempted me to follow his lead. But I was only 10 miles from the finish and I couldn't really consider dropping out. So I just sat. And that's when I noticed a kid with a popsicle. It turns out the aid station personnel had just brought in some popsicles! Tom and Allison got me a banana popsicle and it went down real easy. So easy, in fact, I asked for a second one and ate that too. At least I could eat something.

As I sat eating my popsicles, Tom, David and Blake's wives all helped encourage me to get going again. Again, was just prolonging the inevitable so after downing a half quart of water to wash down the popsicles, I grabbed my two hand bottles , and headed out about 2:10pm.

My two hand bottles had a gel in each bottle sling in case I started feeling good enough to eat them but I never did. It turned out for the final 30 miles of the race I ate only five pieces of watermelon and two popsicles. I did, however, swallow my fourth and final electrolyte tablet of the day just before climbing up to Vickers. The heat was a bit stifling, as usual, in the aspen groves going up Vickers so I stopped to take off my shirt for the final segment. Also, I had been wearing my iPod so I cranked up some hard, fast screamy music (A Day to Remember), and started the climb. Ironically, I actually did feel pretty good and had my best “Vickers section” run ever. I power hiked pretty strongly up the climb and even noticed that I was slowly reeling in some runners ahead of me. Once I topped out on the climb and began running through the four meadows up on top, I began passing runners. I passed one runner just before the Vickers aid station and another one while in the aid station. I still couldn't stomach the idea of food but ate two pieces of watermelon at the aid station before heading out.

It was now 3:28pm and there were roughly four miles to go to the finish. I did the math in my head and thought for a while that I could still finish by 4:00pm. I was never very good at math and I presume you can see that from this miscalculation. Nonetheless, it inspired me to run fast and while my energy level wasn't very high, my legs still felt very good and I began to run hard (for me) down the hill. At times I was running under 8 min/mile pace and eventually caught back up to Rhonda. I passed her with some encouraging words and soon thereafter passed another couple of runners. I'd never felt this good on this descent so despite a pretty miserable day to that point, I was stoked to be feeling so good at mile ~47. I normally end up getting passed in the last few miles of this race so it was quite encouraging to be passing by others instead.

At 4:00pm I had just entered the streets of Lake City so my hopes of finishing under 11 hours were dashed. Still, I ran when I could and eventually crossed the main street through Lake City, Gunnison Avenue. I looked back over my shoulder to see the last runner I had passed on the descent coming up strong. I was again motivated and picked up my pace to turn the final corner before the straight-away to the finish line. The clapping, cheering and whistling further motivated me and I ran across the finish line at 4:12pm. I pretty much just collapsed into the shady grass and laid there for 15 minutes before mustering the energy to move and go drink my typical post-race recovery drink—a quart of chocolate milk. 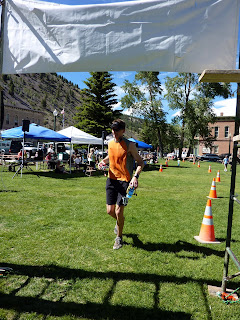 Happy to be at the finish line

SJS50 is a tough course for sure but it was particularly rough for me this year with my lack of mileage before the race and my unusual stomach trouble during the race. But at least two very big positives came out of the race for me. First, I finally felt good for the final 10 miles of the race through Vickers and second, my IT band did not pain me in anyway. Also, my left knee surgery doesn't seem to have negatively impacted my running. I still ran a pretty respectable time and it was a gorgeous summer day in the mountains. I'm lucky to have the means and opportunity to run race like this in such spectacular locations. I have no complaints. Thanks for reading.