Hill repeats how I love thee...

Now that I'm recovered from Hardrock (I only ran 60 miles so recovery was pretty quick), it's time to focus on my next planned race, the Pikes Peak Ascent, on August 16th. I've never run this race but it's 7,000' feet of climbing in 13 miles so I know it'll be tough. I hear 3 hours is a way solid time so I'll be shooting for 3:20. My naivety could be fueling that time estimate? We'll see.
As for training, I feel hill repeats will be crucial for a good time in the PPA. With that in mind, I resumed the Pajarito Mountain hill repeats today. The standard repeat is straight up the Aspen Run. A typical run up the run to the top of the Aspen chair is .63 mile and 1,110 vertical feet. I ran my first lap up in 16:53--not quite a PR but close. It took nearly 11 minutes to run straight down Aspen. On the second climb, I took it much easier and stopped to urinate and completed the run up in 19:33. To descend I ran one of the more circuitous mountain bike trails down through the trees between Big Mother and Little Mother. More runnable but slower with a descent time of 13:03.
Each time I go up there to run, I consider how lucky I am to have such a great place to run and train so close to home. It's green, cool and high so the views are amazing. I'll be up there at 5:20am this Tuesday and Thursday to run a few repeats before work. Hope to see you there!
Posted by Jason Halladay at 6:38 PM 3 comments: 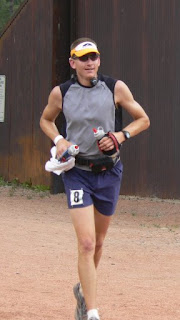 Coming into Telluride around mile 27

For the third year in a row, I traveled up to Silverton, Colorado to run the Hardrock 100 mile trail run race in the wild and scenic San Juan Mountains July 11-13. I ran and completed this tough race in 2006 and 2007 finishing it once in each direction to become the "true Hardrocker" as they say. This year I threw my name into the lottery again and ended up 17th on the wait list in February when they did the drawing. By the end of June, enough people had bailed out of the race that I was officially in. However, before that time, I hadn't fully committed to the race mentally so when I decided to run it again this year, I wasn't sure how I felt about it.

It's an awesome scene and I feel like I know so many other Hardrockers that I really enjoy going to Silverton to see everybody and feel the excitement surrounding the race but personally I guess I wasn't ready to run it again. But when I did start on the race on Friday morning at 6:00am, I decided I might as well see if I could run it pretty hard.

That was a bit of a problem! I went out secretly hoping for running under 32 hours but I told no one about this. Since I had finished Hardrock in 2006 and 2007, I knew I could finish the race so I figured I might as well try to really run it. At at mile 35 (really early in the race!) it became obvious to me that I hadn't trained enough to run that pace and I started really feeling it.

The biggest climb in the race comes out of Ouray starting at mile 43 at 7800' to Engineer Pass road at 12,900'. I picked up Bill as my pacer in Ouray and felt like I was crawling all the way up to Engineer Pass road. When we reached Grouse Gulch at about mile 60 a little after midnight, I had lost all desire to continue. My legs still felt pretty good but I was wiped out energy-wise and mentally I just didn't want to commit to going on and going over Handies. Had I not finished the race before in this direction, I would have continued but I had had enough for this year.

It was a great ~60 miles and, Bill, I really appreciate your crewing skills and pacing company from Ouray to Grouse Gulch. Mom, Matt, Allison and Dylan, you guys did a wonderful job of crewing for me and I really enjoyed seeing you all at the aid stations along the way. Thank you so much for taking the time to come support me!

The Hardrock is an amazing 100 miler and there is a great feeling of family amongst all the runners and their families. I'm sure to be back there next year but to see it from the crewing/pacing/aid station side of things. It'll be awesome!

Also, Bill posted some of his photos from the race if you're interested...
Posted by Jason Halladay at 6:24 AM 4 comments: