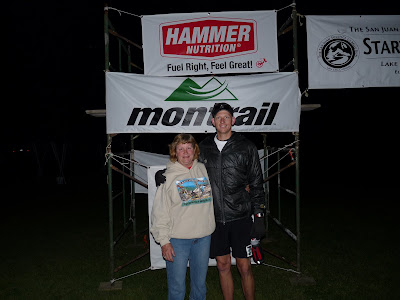 Hanging with Mom at the start/finish just before the race.

8 ounces. It's amazing to me the difference 8 ounces of material can make on a day like this past Saturday during the San Juan Solstice 50 mile trail race. This was my fourth time running this fantastic race and by far the worst conditions I've experienced during the race in those years. But I digress...

For some reason going into the race this year I schemed up the goal of trying to run it under 10 hours. 9:59:59 is what I was shooting for. In retrospect, I'm not sure where I got off thinking I could pull that off considering my fastest time on the course is 10:35:44 and I've only been running an average of roughly 35 miles per week this year. But what the hell, I went out for it. But if you view the results from this year's race you'll see I barely made it in under 11 hours in 13th place overall. Yeah.

From the start at 5:00am I went out with the first group of roughly 12 runners and hung in there until nearly the turn off up into Alpine Gulch when I realized that pace was too much for me and would put me in at Williams around mile 16 well ahead of my goal time of 8:15am so I slowed up. The sky was mostly cloudy making for a warmer-than-usual morning and the river crossing in the gulch were way easier than in 2008. In fact, I could still feel my toes by the end of the crossings so I knew it was warmer and less wet than previous years. Sections that normally have a snow field in them were dry and clear...it looked like a different gulch. I reached the Alpine aid station at mile 7.5 at 6:36am which was right on my schedule. I stopped to refill my single hand bottle with water and kept on moving.

Up on the ridgeline above Alpine there was also very little snow and it was a beautiful morning. The view of Half Peak across the valley was stellar and while there were clouds in the sky, it didn't look too threatening. I got into a good groove and rolled with it making fine time down into Williams at mile 16 at 8:06am which was faster than I had planned but I was feeling good. I came into the aid station with Helen Cospolich and would follow her until the Divide when she just plain took off! It was awesome.

My plan to "shave" off 36 minutes from my best time on this course was, besides running a bit faster, to really minimize time at the aid stations. I did this by not ever changing shoes, socks or any other clothing as well as having bottles pre-filled and a firm plan for switching bottles and fueling quickly. My Mom and Matt were invaluable as my experienced crew and did a fantastic job of getting me in and out of the aid stations super fast. So I can only blame me for not running fast enough in between the stations. :-)

The run from Williams to Carson seemed to go quickly and without any issues and I got into Carson at mile roughly mile 22 at 9:26am. I filled my two hand bottles, ate some Clif shot blocks and looked up at the divide and the sky. It looked quite nice and for a moment I contemplated leaving my 8oz GoLite Virga jacket in the drop bag but thankfully thought better of it and tied it around my waist before heading up. I did my best to keep Helen in sight on the climb up to the divide and managed to do that until just below Coney Peak (~13,300') when she motored on ahead.

As I neared the summit of Coney Peak I looked south to see some very dark, menacing clouds engulfing Rio Grande Pyramid and knew we'd soon be in the weather too. Sure enough a couple minutes after I "ran" over the summit of Coney Peak the snow started to fall. At first I figured it would be a short-lived snow squall but after about 15 minutes it looked like it was here to stay so I donned my jacket. The wet flakes were huge and prolific and it was pretty surreal for a bit. I thought back to earlier in the morning when I was running in a sleeveless shirt and sweating and how that seemed like a different day compared to the current weather. Then the wind began to blow a bit harder, the snow flakes got bigger and it got cold. (See the videos on Joseph Lea's blogpost about his experience this year.) I wished I had brought along gloves but got clever and stuck one of my hand bottles in my jacket pocket so I could suck a hand into the sleeves of the jacket. On my right hand (the windward hand) I wrapped my hand in my cotton handkerchief that I normally use to wipe sweat off my brow and jammed my hand into the hand bottle sling effectively making a cotton mitten. This worked great for the long jaunt to the Divide aid station at mile 31 at noon straight up. At this point I was still on my schedule for a sub-10 run but was feeling the fast miles I had run earlier and the cold weather wasn't helping. I was burning more calories just trying to stay warm in the adverse conditions.

I filled a bottle of HEED at the Divide aid station, ate a vanilla Hammer gel and then got moving again. Standing around for too long would only leave me colder. As I left the aid station I was pretty sure I saw my friend and frequent training partner David Coblentz striding up the hill into the aid station. For the first time I ran the whole section from the Divide to Slugullion without seeing another person. This is not to say I was way ahead of others but rather the clouds and snow were so thick that at times visibility was maybe 50 yards. It was pretty surreal and I wondered how people who hadn't been on this course would manage through this section...it's pretty obvious following a well-established two-track but I know if I didn't know the course well I'd be second-guessing myself wondering if I was supposed to turn off or something. Also, I was hoping folks behind me were prepared for the weather. It was pretty nasty.

Then, to make things more difficult, the super wet dirt road turned to a gloppy mud that began sticking to my shoes making them feel a few pounds heavier not to mention slick! I got in the habit of kicking the bottom of my shoe on big rocks as I passed them to knock the mud globs off. I repeated that procedure all way down into Slumgullion at mile 40 at 1:40pm. I had hoped to arrive at Slumgullion at 1:20pm for my sub-10 goal. Being wet, cold, 20 minutes "late" and a bit beat up at this point I knew sub-10 was out of the question now. My fingers were a bit numb so I asked my Mom for my gloves out of my bag and struggled to get them on. By this point it was raining rather than snowing at this elevation but I figured dry gloves on my hands for at least a little while would make me feel warmer. I spent approximately three minutes at the aid station which I believe was the longest of all my aid station stops during the race.

I left amongst spirit-lifting clapping and hollering and felt very grateful for everyone being there encouraging us runners in our endeavor. The climb up Vickers has always, always kicked my ass and this year was no exception. I don't know what it is...it's relatively low in elevation and in aspen groves so you'd think it would be easy but no! I struggled my way up thinking, "OK, next year I'll feel good at this point." Yeah right! About half way up the climb I heard a familiar voice from behind. David Wilcox was charging up the hill smiling and encouraging me to get a move on. He passed me and I tried to hang with him for a bit but knew it was not to be. We kept on moving up and into the trees to the flat section when the rain finally started to abate. I lost sight of David but kept running as much as I could across the top of Vickers through the three meadows. I've learned to count the meadows before the final aid station. Just before the Vickers aid station came into view the 10 hour mark slipped by. Yep, not this year. I reached the Vickers aid station at 3:06pm and didn't stop at all but thanked the volunteers there for letting us run through their property and for being there to support us.

The sun had just come back out and it looked like it was shaping up to be a fine afternoon. I stopped to take off my jacket and gloves and tied them around my waist. The descent down from Vickers is always tough on my quads and this time was no different. Also, I had to make a pit stop in the trees to take care of some trow-dropping business. Refreshed a little bit, I got back on trail and tried to run as fast as I could. It was now looking like that sub-11 would be a challenge and I was sweating it. These arbitrary goals are tough sometimes. I finished the descent and was back in town running the final mile or so into the finish when I looked back to see Coblentz only a couple hundred yards away! Nice, David, nice! The competitive adrenaline kicked in and I stepped up my pace. Plus, I knew it was going to be tight for sub-11 anyway. We crossed the bridge and made the final left turn towards the finish. I was still sprinting as best I could and got psyched to hear the cheering and cow bells ahead. The positive vibes were nearly overwhelming as I entered the park and across the finish line just a bit more than a minute faster than my time last year.