Moab Alpine to Slickrock 50 mile race 2008 (and some climbing too!) 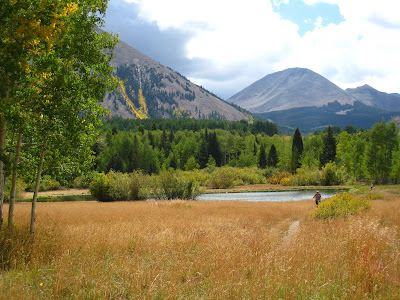 Wow, so it's been weeks since I blogged at 'cha y'all. Sorry for that. It's been a fun few weeks so I hope to write about that soon but for now...I'm sitting here stiff and sore after running the Moab Alpine to Slickrock 50 mile race yesterday. This was my first time running this low-key, high-quality race and I really enjoyed it. If you like easy, flat 50 mile races, this one isn't for you but if you enjoy amazing mountainous terrain with super scenic views of canyonlands, put this race on your calendar for next year!

The pre-race on Friday was very relaxed and small. Only about 45 runners signed up for the race. Allison, Mom and I met up with Sean and Mike (running in his first 50 mile race ever) at the pre-race in Moab on Friday evening and we got the course briefing. It was all very informal and mellow and I really appreciated that. After dinner at Pasta Jays with Mike and Felicia, we drove to a campsite right near the start line at the Pack Creek Picnic Area in the La Sal Mountains. Camping there in the national forest was awesome with a campfire and the waning but bright moon. The only thing not awesome about it was the gigantic patch of goatheads that Allison and I pitched our tent on unknowingly. Well, even after realizing the mistake and adding another beefy tarp under the tent, we both still ended up with deflated Thermarests in the morning. (I later found 17 holes in mine and 6 holes in Allison's.) Nonetheless, I got a good night's sleep and awoke at 4:45am.

It was a warm morning and it was much easier to get out of bed than it often is at higher, colder runs. After downing a toasted bagel and 12oz of coffee I got my growler on and then headed over to the start line a few minutes before 6am. It was a small group of runners and I liked that. I started wearing shorts, sleeveless shirt, a visor, sunglasses, GPS watch and iPod. Also, I made a bold (and perhaps foolish decision) to wear a new pair of La Sportiva Fireblades that I had only run 7 miles in up until race day. The gamble paid off and I really liked the shoes. The low delta-H (10mm) is fantastic. :)

We all got going at 6:00am at the trailhead at 6,400' under the bright moonlight following the Pack Creek dirt road up for a few miles and eventually catching the Pack Creek trail which paralleled a decently deep river gorge on our left. The fall colors were amazing and as we climbed higher I had to take it easy so I wouldn't trip as I looked around to take it all in. The glowing light of the sunrise illuminating the red rock of Canyonlands to the west was phenomenal.

The first part of the course climbs hard from 6,400' to 10,400' in about nine miles to the La Sal 4x4 jeep road crossing through some scenic meadows along the way. From there it was descent on a jeep road and then more single track through some more nicely wooded areas with great views to the valley to the second aid station at Squaw Springs at mile 14. I enjoyed more great single track (and suffered a hard but non-painful digger) on the next section of single track to Oohwah Lake at mile 17. More climbing and more fantastic views summed up the next section of trail to the Geyser Pass aid station at mile 20. Allison and my Mom were crewing for me and were at Squaw Springs, Geyser Pass and Warner Lake and it was great to see them there! 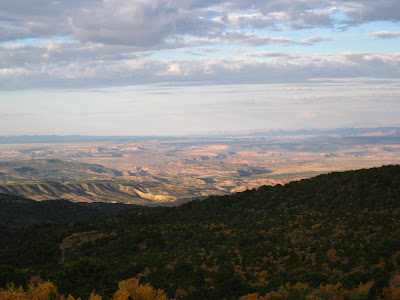 After Geyser Pass came the climb up Burro Pass to the course's highpoint at 11,000+ feet. That was an awesome climb as at one point I looked up to watch the runner ahead of going up the pass and noticed the moon, appearing very large, above his head and above the pass. I wish I had taken my camera! The other side of Burrow Pass was a steep, technical descent that downhill mountain bikers love. I kept myself in check on this knowing I didn't want to beat up my quads just yet. I eventually rambled into the Warner Lake aid station at mile 26 in 6 hours, 5 minutes. I was doing exactly what I wanted to do--go out a decent pace but hold back enough so that I could run more later on the fast dirt roads. I was hoping for negative splits and I ended up with that. (5:50 for the first 25 and 4:52 for the last 25.)

The climb out of Warner Lake to the top of the pass into Miners Basin was an ass-kicker but I had some company (Shane who had just ran the Wasatch Front 100 miler a couple weeks ago) to commiserate on the way up. Shane would go on to finish in 10:01 in second place! On the descent into Miners Basin it rained and hailed on us pretty good for a short bit but that felt nice, actually. The Miners Basin aid station was done up in "saloon style" complete with liquor. I just went for the chicken noodle soup and some water though. From there it was a fast downhill on dirt road to the pave La Sal loop road where we turn left and run uphill on the paved road for a couple miles to the Kokopelli trail turn-off. The paved road kinda sucked but the killer view of Castleton Tower and Castle Valley more than made up for it!

After a quick stop for a bottle refill at the Kokopelli trail turn, I shuffled my way down the Kokopelli trail through the recently burned area. On my way down I passed a guy with a dog on his way uphill and he shouted, "Go Hilltoppers!" I didn't recognize him at all but he obviously knew I was from Los Alamos High School somehow. He would later catch back up to me and explain he had been talking with Allison earlier and that he, David, was from Los Alamos originally. Cool!

Thing started to get warm as I ran onto the Sand Flats Road and aid station at mile 36. I filled both my water bottles and reveled in the thought that the finish was only 14 miles of all downhill dirt road away. I actually managed to run most all of the remaning 14 miles at a decent pace (~9:00/mile) and felt good. I knew my race strategy had paid off as I distanced myself from the runner behind me and passed another runner that had been in front of me. It felt wonderful to actually be feeling good in the final 10 miles of a 50 mile race. That's a rarity for me. One short spur road off the main Sand Flats road was a bit rough as we had to run on a good bit of slickrock and rough terrain (but it was a nice change to get off the main Sand Flats road) and I hit the last aid station at mile 42.

I tanked up on water there, down some more gel and an electrolyte tablet and started going for it. I ran almost all of the final hot, open road to the finish walking only a couple of short uphills. With a few miles to go I took off my shirt as I felt I was overheating a bit. And then, just like that, I rounded a corner and saw the finish line at the Slickrock Bike Trail parking lot and kicked into as high a gear as I had left to finish in 10 hours, 42 minutes which turned out to put me in sixth place overall. I sauntered over to the shade of the CR-V where Allison and Mom had been waiting for me and just collapsed into the chair. It took me a while to get motivated to move but the thought of a shower, food and a beer in Moab was very motivating! 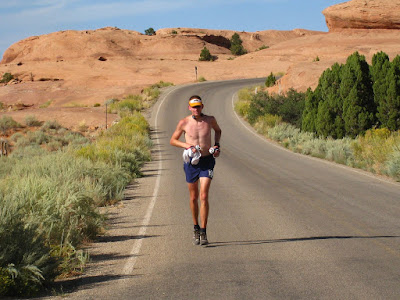 This race is awesome! The last seven miles are pretty brutal but the rest of the course really makes up for it. The low-key style of the race is very appealing to me and the terrain is some of the most scenic I've ever run.
Posted by Jason Halladay at 9:35 PM 1 comment: