A productive week at work followed by a chilly but nice day of rock climbing at The Dungeon and a short morning of backcountry skiing/boarding in the Jemez again... 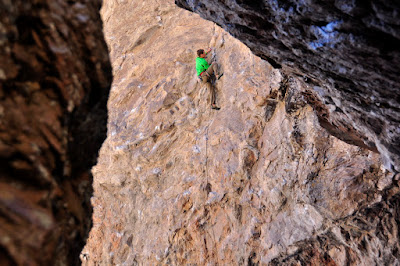 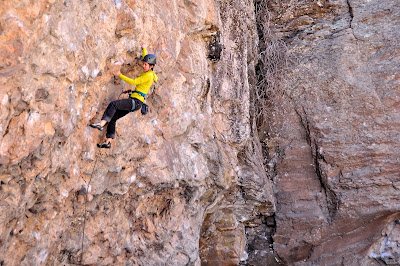 There's been much talk amongst Andy, Sarah, Josh, Aaron, Sam and I about our Denali climb/ski trip coming up this summer. Needless to say, we're psyched! So I dug out my old journal from May/June 2003 when I first climbed Denali. I had a great time reading through my notes and conjuring up memories from that amazing trip. At the time it was huge for me. The biggest, baddest thing I'd ever done. And I can feel that coming from the words in the journal. So I took some time to type up the journal notes. I've included the notes from the first ten days of the trip, below.

Thursday, May 15th - A long day. Left Los Alamos at 5:15am and finally arrived in Talkeetna at 8:15pm (which is 10:15pm MST). It’s now 10PM (AK) and it’s still as light outside here as it is at 7pm in Los Alamos. The sun has not set yet. I hope to be able to sleep tonight. We’re at the Swiss Alaska Inn for the next two nights. We took the Talkeetna Shuttle SErvice from ANC. Audrey was on the phones and Stephanie was our driver. Stopped at Safeway in Wasilla for groceries. Drive time from ANC was about three hours (including grocery stop - bad traffic in ANC.) Chris, Bill, David and I are getting along very well. Janet will get in tomorrow. We have a great team--The Green Chile Winds.

Friday, May 16th - No major notes. A day in Talkeetna organizing and getting ready. Local mountain shop is small but has exactly the necessary items one needs for Denali. Buy and rent anything you need. We got 6mm cored, wands, duct tape, nose guards...

Saturday, May 17th - Wow! We left Talkeetna at 9:40am on K2’s Cessna 185 in a drizzle and I was not optimistic about the glacier conditions but I was way wrong! Around 10:30am we landed on the Kahiltna under nearly perfect skies. A view of the summit and no wind! What a beautiful day. I hope we have more like this. The scale of the surrounding terrain is nearly incomprehensible. Looking at Foraker’s norths face shows nearly 10,000 vertical feet but it looks like a day hike from here. No way! It’s 9:30pm now but still as bright as late afternoon in NM. The sun is just now “setting”. The plan is to wake at 4:00am and single carry to 7,900’ camp. We practiced crevasse rescue just north of camp in a small crevassed today. Dined on pizza and chili mac before settling into bed. Listening to 104 KWHALE before bed.

Sunday, May 18th - Awoke at 4am after a good night’s rest. Temp was about 12 degrees outside and about 25 in the tent. At around 7am, we headed out for the base of ski hill, 7,800’. Bill, Janet and I were on one rope with Chris and David on the second rope. The area was foggy with a light snow overnight. The route to ski hill was very well defined with no major hazards. A really cold breeze confronted us once on the Kahiltna main glacier and since I was only wearing my underwear top, I got real cold. But once the sun hit us, man it was nice. Bill, Janet and I arrived at the base of ski hill camp at 10:30am--3.5 hours to ski hill from base camp. It is so warm right now, it’s amazing. We scored a sweet camp, cooked up some pizza and jammed to tunes on the CD! Tonight is dinner followed by cinnamon cake dessert. This life is impossible to beat!

Monday, May 19th - Awoke after another great sleep at about 6:00am. 21 degrees in the tent with 5 degrees outside. It felt very cold and I’m a bit worried about the -35 degree low at 17k as advertised by Lisa at base camp. We carried a cache to 11k today in about 5 hours. The weather was, again, beautiful., The snow condition was so great we were able to sled down unroped and made it back to camp in an hour. Awesome! Th weather was even warmer at camp today and we enjoyed more CD music and some FM radio rock on KWHALE 104 - Anchorage’s rock station. Dinner was some spicy cajun chicken and rice with cinnamon coffee cake for dessert. Tomorrow our plan is to move to 11k camp and rest a day. Our first full rest day of the trip. Snow is in the forecast for Thursday but it does not sound like a major system and should clear by Friday night. So far we’ve been spoiled with wonderful views!

Tuesday, May 20th - Awoke at 5:30am to 18 degress in the tent and 10 degrees outside. Dined on the denver omelette, packed up camp and hit the trail around 7:50am for a move to 11k camp. We traveled unroped to camp satisfied with the stability of snow and route after yesterday. I arrived at 11k 4.5 hours later, 30 minutes faster than yesterday with a heavier load than yesterday. it was another beautiful and warm day. We scored a great two-tent site with full height walls. I, of course, spruced up the kitchen and made a bench for five. The sweetest camp yet. Light snow, light wind and clouds have socked us in now so I’m just chillin’ in the warm, cozy tent (VE25) listening to new rock on the KWHALE, Anchorage. The view down by Kahiltna Pass was awesome before we were engulfed by clouds. We were camped above the cloud deck. I felt like a Care Bear. The yellow one -- sunshine. A system is supposed to be approaching. It’s supposed to be weak but bring wind and snow for the next couple of days. It sounds like we’ll have a window tomorrow for a carry to 13,500’. We were planning a rest day for tomorrow but with the snow coming in two days, we want to try to get a cache up before the storm comes in.

Wednesday, May 21st - We awoke to a mild 12 degrees and began our carry around 10:15am to 13,500’. We roped up as five Oh, for breakfast I cooked pancakes which were messy but very tasty and worth the effort. We moved slowly up Motorcycle Hill but once past the hill our pace quickened a bit. The route was crowded and backed up around Windy Corner but the corner itself was really quite easy. There was a number of crevasses but they were all small and well covered on the route. We cached at 13,500 around 2pm and it was a roasting outside! I found a full 22oz fuel bottle in the ice on the way up. However, I punched it while digging it up. The fuel was salvaged though! We roped up 3 and 2 on the way down and it was much more efficient. We got back to camp around 4 for a nice afternoon. We listened to the NPS weather report and it was not favorable. Wind and six inches new snow. Thursday is to be our rest day so weather is fine. Bill, David and I listened to Loveline on 106.7 KWHALE, our nightly ritual now.

Thursday, May 22nd - We awoke to around 20 degrees at 9:00am. Rest day - great to sleep in! We had blueberry scones for breakfast and the weather was not at all nasty. It was warm and calm all day and very relaxing. We cooked up some delicious BBQ pizza for lunch, banana nut bread for snack and wild west chili for dinner. We plan to move to 14k tomorrow but weather forecast is wind 15-20mph and snow tonight with clearing in the afternoon so I hope we can get up there. We plan to wake at 6am and it’s butt-ass cold at that time. None of this early past 14k though--wait for the sun. This chili is causing some major gas attacks in my sleeping bag. Rumble on the Thermarest. Snowing lightly now but it will hopefully be warm with the clouds here. We met the three young climbers that have been leapfrogging us. Andrew, Brian and Mark from South Dakota. Nice dudes.

Friday, May 23rd - I’m now using David’s pencil as it’s too cold [for a pen] at our new camp at 14k. The low tonight is going to be -15F with a high of 5F tomorrow. This morning we awoke to -1F and it was cold. However, our gradual ascent up is allowing me to adjust to the insane temperatures. I’ve never slept in anything lower than 02F or so, so tonight ought to be interesting. We awoke at 6am today and packed up to leave 11k camp by 8:45am. Going was slow but we arrived at our 13,5’ cache in 3.5 hours which is 30 minutes faster than our previous trip up to 13,5’. David was hurting a bit on the way up to 14k so I slowed the rope pace way down for the last 700 feet to camp. We got into camp around 2pm and built another “super camp”. The kitchen will be completed tomorrow. The weather today was stupendous allowing us views of Foraker, Hunter and much of the Alaska Range. We were above the clouds all day which was awesome. There’s some definite tension among the team members. David and Janet don’t seem to get along well at all. But Bill is the pillar of strength for the team with his constant positive attitude and straight forward thinking. When I being to question why I’m here with these folks, interacting with Bill clears up my thoughts and brightens my spirits. I’m super glad Bill is here. Tomorrow we will sleep in and go retrieve our 13,5k cache. Warm dreams!

Saturday, May 24th - We awoke to -3F in the tent and waited until the sun hit the tent before crawling out of the sack. The weather was again very nice and warm. Bill, Chris and I took the sleds down to 13.5k cache to retrieve our stuff. It took us about 20 minutes to get down there. We underestimated how much shit we had down there so the 3 of us hauled loads of about 50lbs each. it took us about 1:15hr to get back up to camp. We spent the rest of the day hanging around camp and eating more fudge brownies! The evening was capped with some heavy Uno matches between Bill, David, Chris and I. The marathon match went through 3 shuffles and about an hour. Good times.

Good memories. I am excited to see how the trip turned out :-) Nice Jemez video also!