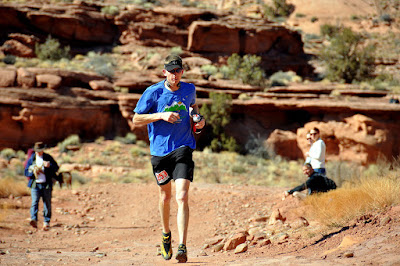 Allison and I headed up to Moab this past weekend so I could run in the super popular, mega fabulous Red Hot 55k trail race. I hadn't run this race before but it garners huge accolades each year so I registered as fast as I could last fall when registration opened. It's a good thing, too, because it filled up in less than 24 hours, I believe. I hadn't gotten in the amount of training I'd hoped to so I went into the race very relaxed and with no pressure on myself at all. This felt great! In fact, I was so relaxed I forgot to pack running socks (I nabbed a pair at Gearheads though.) It was rad...I packed some shoes, running shorts, gloves, arm sleeves, two gels, a flask of EFS liquid shot, visor, sunglasses and a single hand bottle. No drop bag and no aid station planning. I didn't even pay attention to how many aid stations were on the course nor how far apart they were. I was just going for a training run in a scenic location with 200+ friends. Saturday morning dawned clear and quite warm, actually. At the Gemini Bridges TH, the start line for the race, it was in the upper 20s and the sun was out. No wind. Stellar. The race started at 8:00am and enjoyed running up to about mile 12 with Ryan and Susan as well as chatting with a couple of other friends along the way. The pace was pretty relaxed and I was trying to save my legs and feet for later in the race. However, at mile 8 the ball of my right foot starting aching pretty severely. I had worn my La Sportiva X-Country shoes and that was a bad idea for this course. I love those shoes but on a course with lots of rocks and slickrock running, the lack of real cushion on those shoes did me in. I managed to grit it out the rest of the race but I had to stop a few times to massage my foot and toes to get the blood flowing again. I ran a few miles in the middle of the race with Steve Bremner. It was great to converse with him for a bit before I started feeling the miles a bit and had to just zone out with my iPod for the rest of the race. The slickrock running from miles 21 to 25ish were really tough on my feet and legs. Off-camber running that just didn't allow me to get into a groove or any real running cadence. My quads were feeling it. I felt pretty good otherwise, though, taking a pull of my EFS every now and then and washing it down with plain water. I finished in 5:25:17 (39th of 200), reaching my goal of sub-5:30 with some good padding. I was damn beat by the finish, though, and it took me a good 30 minutes of sitting down and drinking chocolate milk before I felt ready to be conversational and jovial again. I guess that means I really did leave it all out there on the course, though, so I'm pleased with that. The post-race scene was great! Soup in bread bowls, music, lots of conversation and beer were in high supply. The afternoon was gorgeous making it great for just hanging out under the sun. I hope to return to this race next year but with some more adequate shoes!

While the race was a blast and I met my goal, the true highlight of the weekend was the tower climb Allison and I did on Friday before the race. We drove up north of Dove Creek, CO, to a camp on Thursday night so we could climb Psycho Tower on Friday. Psycho Tower is a wildly exposed but very moderate desert tower climb and I was psyched to climb it with Allison. So much so, I thoroughly documented it.


The climbing was just plain fun. Not scary, not difficult and way airy. Such a cool little summit way back in the middle of nowhere. Take a look at the movie and let me know what you think if you'd like.
Posted by Jason Halladay at 9:20 PM

Nice video Jason,that and the overlook pics makes me iching to climb again!Para-glide or Base-Jump off tower??,climb doesn't count otherwise^^.

@Randy, flying off the tower in some fashion sure would have been great. We just rappelled. :-)

@MoabUtah, by all means. Thanks for asking!

That's pretty sweet you sent Psycho Tower. I climbed it with Charlie Fowler back in 04'. I like your style, hitting and ultra and a tower!

Thanks Ben. It must have been great to climb that tower with Charlie. I never met him before he passed but it sure sounded like he had a passion for life (and desert climbing) that I can fully appreciate.