Not a lot new to report 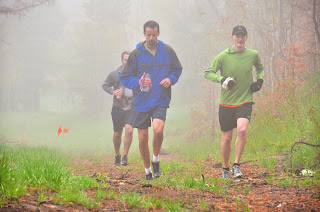 Adam, Devin and Andy running in the Pacific NM

It's been "business" as usual these days. Working Monday through Friday, running at lunch, climbing in the evening and then doing more climbing and running on the weekend. In other words, life is great still. Last weekend I spent the entire weekend up at El Rito, climbing. Saturday I spent the day leading graduates of the annual Los Alamos Mountaineers Climbing School up the fun two-pitch routes at the El Rito Trad area. I really enjoy doing this every year--it's always very rewarding to expose new climbers to the beautiful and rewarding multi-pitch climbing at El Rito. This year was particularly special when I climbed with a student that was initially quite fearful of multi-pitch climbing but found as she climbed higher she really enjoyed it. We topped out late in the day where it was clear she was completely psyched to have completed that climb and gave me a huge hug. I was very elated to have been a part of it.

Saturday night Allison and I camped up there at El Rito with our friends Hunter and Allison but instead of cooking our own dinner we drove into the town of El Rito for a super tasty dinner at the hole-in-the-wall El Farolito restaurant. Back at camp, the night was quiet and serene with the super moon illuminating the surroundings. We slept great in the nice, cool overnight temperature.

Sunday we spent the day sport climbing at the El Rito sport area. The steep conglomerate rock there offers super fun climbing and we climb many times per year there. We all climbed well, particularly Allison on her new project, Against All Cobbs. I finally sent an on-again-off-again nemesis route called Crack Attack so I left there pumped and pleased.

At work during the week I finally released a data sync script I had been working on for a while. Even after lots and lots of testing, and many revisions, I was still nervous knowing the script would affect 13,000+ user accounts but it turns out it worked brilliantly and did more good than harm.

We were back up at El Rito Friday with our friend Rick for some more sport climbing followed by guacamole, chips and margaritas at Gabriel's in the afternoon. A fine day all around!

I spent nearly all day yesterday packing food and gear for our upcoming trip to Denali. I was very productive and feel much better now having gotten that done. But I didn't do much else so I felt lazy. That said, I got up this morning and went for a hard run up my local time trial run and managed to set a personal record on the run. So yes, psyched! The weekend was pretty dreary and rainy all weekend so really it was a good weekend to spend inside packing and what not.

This week we'll be marking more of the Jemez Mountain Trail Runs (JMTR) courses in preparation for next Saturday's races! Looking forward to it!

Posted by Jason Halladay at 8:30 PM