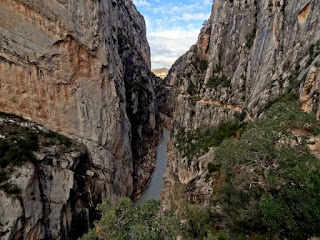 In my best Herbert Kornfeld voice, "What tha dilly yo, mah homies?" It's been a very enjoyable few days since I rapped at 'cha ya'll. Thursday we slept in until 8am or so, brewed up some coffee and had a light breakfast before heading out into the rain with hopes that we'd find something dry to climb. If not, we'd do some hiking and exploring some other area of Catalunya because there's so much to see anyway.

So we drove the few miles south to the crag nearest our apartment, Collegats. Collegats has a staggering amount of conglomerate walls as well as many limestone walls. We hiked up to the Sector Cine under dark clouds knowing that the short reprieve of rain would not last. Nonetheless, we found a route, Blue Velvet, that looked mostly dry and within our we-haven't-climbed-in-ten-days abilities. Rated 6a+ (5.10c), it was enjoyable romp up fun bulges of conglomerate cobbles for 60 feet. As I was leading it the rain starting to come down. By the time I had lowered back to the ground, it was a steady drizzle of rain. Allison chose to TR the line since wet cobbles tend to be very slick. But she was so psyched to be climbing that she TRed it twice despite water running down her sleeves each time she put her hands on the top-side of the bulges. It was fun to be climbing in a new part of the world despite getting soaked. We packed up and headed back to the car.

Desiring to see a bit more of the area we drove for about 30 minutes up the nearby Vall Fosco. In addition to seven lakes, each one above the other, there's a tramway up there and we thought that would be fun. Unfortunately when we got to the tramway, it was snowing hard, visibility was zero and the tram was closed. Oh well. We beat feet and returned to the apartment and then to the local grocery store in Sort. A homey kind of day. But the rain did stop around 5pm affording me an hour or so to get in a nice 7 mile run up the hillside outside of Baro through the small town of Arcalis. The clouds cleared long enough for me to get a great view down into the valley and see Baro and north to Sort. I didn't have my camera though.

We awoke to rain Friday but it tapered off so we loaded up the car and headed south for about 40 minutes to the superb climbing of Terradets. On the way we figured out how to fuel up our car. :-) Terradets was a blast and we got in a pretty full day of climbing there despite getting pelted by rain on our last route of the day, L'Ansia. We climbed six pitches of rock before the rain came in again so we were psyched.
We then headed to the impressive gorge of Congst de Mont-Rebei. It rained and snowed hard as we drove to the trailhead for the gorge but once we arrived, the rain stopped, the clouds lifted and the sun even came out for a while! We enjoyed a two-hour hike down to, and through, the gorge. It's very impressive and the blueish color of the water flowing through the gorge is mighty pretty.

Today we had another leisurely morning as it looked rainy outside but quickly cleared. We headed south from our apartment to visit the lesser-known crag of Coll de Nargo. It was sunny and nice to be out on some easy, single pitch routes. Nothing particularly inspiring but nice nonetheless. 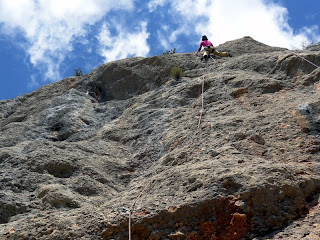 After four routes there, we decided to go check out the world-class crag of Oliana. Oliana is the crag of multiple 5.15s and synonymous with high-end sport climbing. Last year, Chris Sharma sent two 5.15s in a day there and this spring it's been THE place for hard female climbing with at least three women sending "Mind Control". 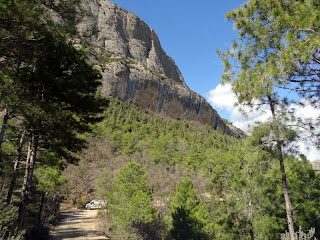 Even though we'd be looking for the less-than-5.12 routes at Oliana, It excited us to see the area in person. It was an easy ten minute hike up to the severely overhanging, orange-with-gorgeous-blue-streaks wall. It's mind-boggling to see how steep the wall is at the top and see the tiny holds the best sport climbers in the world can hold on to. We headed to the far right-end of the crag and climbed a couple 5.10+ routes before moving closer to the center of the wall where I got on the lower part of some 5.ridiculous route. The route had draws hanging on it so there was no commitment. I managed to get up to the fifth draw, through the junky-rock climbing, to where the rock got beautiful. And that was it. A couple of falls and I was done. And we were done with the day. A fabulous day! Back at the apartment I cooked up some chicken paella and we filled our bellies. Buenas noches! 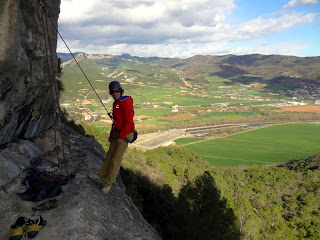 Hanging out at the right end of the wall. Can't beat the view. 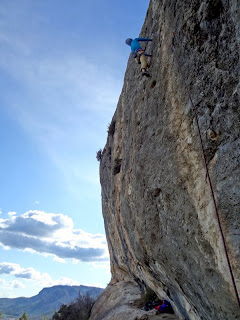 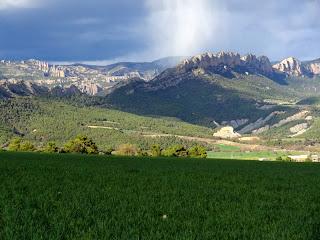 Approaching rain storm over an amazing amount of rock
Posted by Jason Halladay at 1:45 PM

Impressive that you could get your feet off the ground on the 5.ridiculous, much less that many bolts up. Nice work with the photos. I really like all the green that contrasts the cliffs. We don't get that here.

Wow! congratulations you did a great job, It's not easy to climb on those mountain rocks.